Making handmade classical, flamenco and acoustic guitars in Spain since 1964

Raimundo Guitars have a staff of 29 artisans who make classical, flamenco and acoustic guitars of every grade, from student models to top of the range concert guitars. At their workshop in Paterna, near the city of Valencia in Spain, they produce over 12,000 instruments a year, 85% of which are exported to countries across the globe. But this wasn’t always the case: just over half a century ago, the sum of Raimundo Guitars was one man, a dream, and a passion for his art.

The year was 1968, and luthier Manuel Raimundo decided to branch out on his own and open his own guitar-making studio in a small shop premises belonging to his family. He worked industriously at his trade and a few months later, was able to employ salesman Salvador Cortina to travel all over Spain and spread the word. Raimundo and Cortina made such a great team that very soon they had grown so successful that they decided to try their luck in the international market. It seemed that everything they touched turned to gold, because there was a huge demand for their superior quality instruments: by 1980 Manuel Raimundo had increased his workforce to over 20 people, who between them made an astonishing 8,000 instruments a year.

In recognition for this resounding success, the company was presented with its first award from the Valencia Chamber of Commerce in 1981, followed by the Quality Award, granted by the Valencian Government in 1993.

Despite their exponential growth up until that point (and from then until today), Raimundo Guitars have not actually changed the way they build their guitars all that much, over the years. They are convinced that their success has come about precisely because they have managed to preserve the artisan spirit of traditional Spanish guitar making. All of their models are still made using the ‘Spanish heel’, whereby part of the neck of the guitar remains inside the body. It is an elaborate and time consuming process, but one which offers a greater stability to the instrument, as well as important sonic advantages that are difficult to equal: the vibrations from the strings travel along the neck with less interruption and the instrument has a superior resonance.

However, at Raimundo Guitars innovation and tradition are not at odds; new models are in constant evolution, as the Research and Development department of the firm works towards the ultimate design, sound quality and finish of each instrument.

Today, Manuel Raimundo’s son Victor is at the helm of the business. He inherited a love of guitar-making, and grew up learning the family trade at his father's elbow. His maxim is that no two Raimundo guitars should be equal: each one must be unique.

Guitarras Raimundo is the first Spanish guitar manufacturer to obtain the certificate of Spanish origin for all of their guitars: 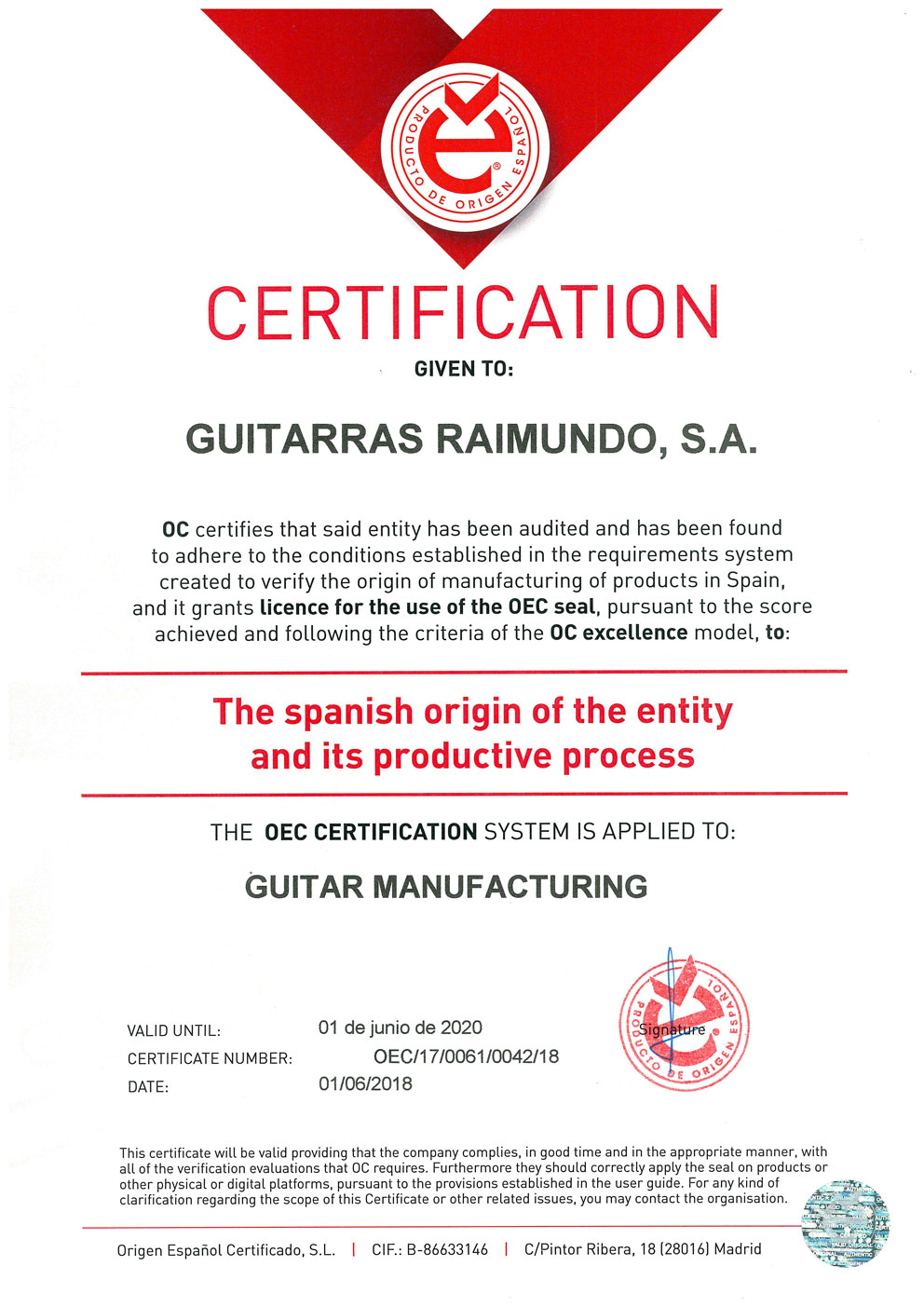