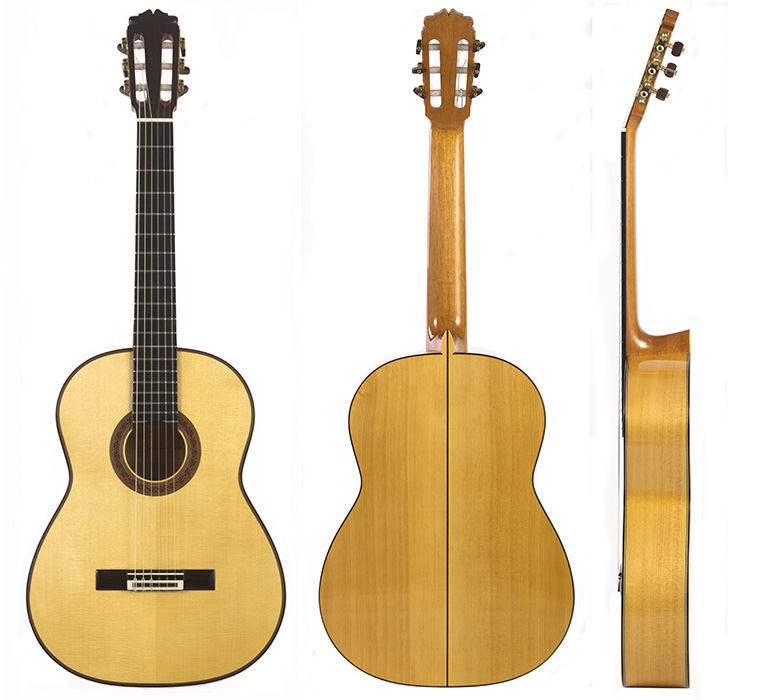 HISTORY OF THE FLAMENCO GUITAR

Today, flamenco comprises song (cante), dance (baile) and guitar playing (toque): in fact, it’s difficult to imagine a contemporary flamenco show without the hauntingly percussive accompaniment of the flamenco guitar. But the origins of this instrument actually date back no more than 170 years, to the middle of the 19th century: for hundreds of years before that, Flamenco was primarily a vocal music, with the voice resembling a primitive cry, or chant. The cante was conducted a palo seco - with just the accompaniment of hand clapping, the striking of knuckles on a table, or with the tapping of a wooden staff to keep the time.

Flamenco music itself has existed on the Iberian Peninsula for some six centuries, originating in the hot and dry southernmost region of Spain that is the gateway to Africa: Andalusia. Here four distinct cultural groups lived alongside one another for hundreds of years; these were the Moors, the Christians, the Gitanos (descendants of a diaspora of Roma people from northern India between the 9th and 14th centuries) and Sephardic Jews. The intermingling of these groups and centuries of socio-cultural evolution produced a musical fusion that was unique to the region. They called the fruit of this coexistence flamenco.

For most of the history of flamenco, it existed as a separate subculture among the underprivileged in society and was an outlet of the poor and oppressed. It is possible that this was one of the reasons why the guitar was not present until much later: the instrument was beyond the means of the impoverished musicians of the time.

The lyrics of many Flamenco songs reflected on the experiences of the outcast and made reference to themes of love, life and death, with expressions of anguish and protest against the oppression the Jews, Muslims and Gypsies during and after the reign of the Catholic Monarchs in the 15th century.

For a long time, Flamenco was a family orientated activity for this reason: they sang secretly at parties, weddings and Christenings and passed the music down through family dynasties. It wasn’t until the second half of the 19th century that Flamenco became a performing art, with the rise of the café cantante (what we now call a Flamenco tablao) in Andalucia, and later Madrid. In these noisy establishments, people met up with their friends to enjoy a drink, whilst being entertained by a group of singers, dancers and guitar players.

This was the Golden Age of Flamenco and one of the most important developments of the time was the conception of a standard Flamenco guitar, by master luthier Antonio de Torres Jurado. This would differ from the classical guitar of the time in that it would have an increased volume to compete with the loud taconeos (percussive footwork) of the bailaores (dancers) and the powerful voices of the cantaores (singers). Torres managed this by enlarging the body of the instrument and using lighter woods (cypress, instead of rosewood) for the back and sides.

By the beginning of the 20th century however, the popularity of the café cantante was in decline and in the years up until the Civil War (1936-1939), flamenco moved from informal public houses to theatres and bull rings, in what was known as Opera Flamenco.

After the Civil War (1936-1939) Flamenco performances diminished considerably. The Catholic church disavowed Flamenco as immodest and informal performances were prohibited by the Franco dictatorship. But by 1955, the Franco regime was in economic difficulty, and changed course in an attempt to attract more visitors to the country. An advertising campaign was devised to sell Spain as the land of exotic female Flamenco dancers. It was a resounding success. Millions of visitors started to take their annual holiday in the country and this funded the economic boom there in the 1960s.

By the time the dictator died in 1975, Flamenco had become irrevocably entwined with Spanish identity and it was declared an Intangible Cultural Heritage of Humanity by Unesco in 2010.

The flamenco guitar has come to play an increasingly important role over the years, to the extent that the flamenco solo guitar is an independent genre today with even greater international renown than vocal Flamenco. 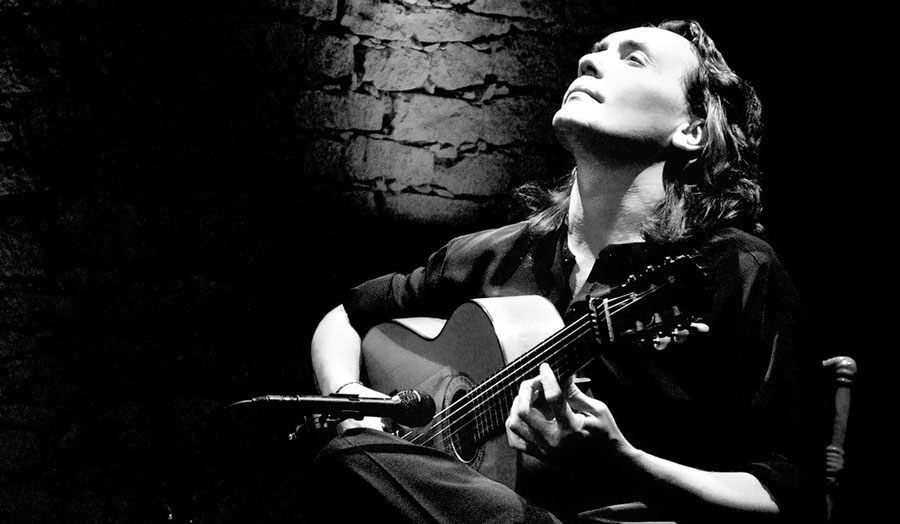 Antonio Torres Jurado (1817-1892) was essentially the first luthier to begin to differentiate between the flamenco guitar and the classical guitar when he started to build his instruments at the time of the café cantante in Seville in the middle of the 19th century. He constructed a bigger and louder instrument to cater to the demands of the flamenco performers of the day. Today of course, every reputable Spanish guitar maker recognizes that the two instruments are fundamentally different and designs and builds a separate collection dedicated to each genre of music.

To most of us however, the two guitars look exactly the same at first glance and we’d be hard pushed to correctly identify one from the other. So, at GFS today we’re going to offer a crash course in flamenco guitar versus classical guitar by looking at the most obvious differences between them.

To start off with, the best manner of distinguishing them is to look at their construction, including the woods used to make them, and the position of the strings. Another important way, of course, would be to listen to the sound each type of instrument produces.

The woods
Different woods offer different acoustic qualities, of course, which is why a master luthier will carefully select the type of wood used to build each part of a guitar. The classical guitar has traditionally had a cedar or spruce top; Recently however, cedar is used more often, because this produces a fuller, richer and warmer sound. Similarly, rosewood is usually chosen for the back and sides, because it offers a greater sustain.

The flamenco guitar is designed to cut through the noise of flamenco dancing, so it usually has a spruce top because this produces a dynamic sound and great projection. The flamenco Blanca (so called because it has a pale, natural aesthetic) has a cypress back and sides which produce a loud and piercing sonority. The flamenco Negra is made in exactly the same way as the Blanca, but darker woods are used for the body, such as Indian rosewood, or cocobolo, which offer greater sustain.

The thickness
The body of the Flamenco guitar is shallower, the top is thinner and it is lighter in weight than the classical guitar. It is designed in this way to produce as many vibrations as possible. The top of the flamenco guitar also includes a shield called a golpeador (a piece of transparent, or opaque white plastic) that protects the soundboard from damage caused by the player’s fingernails and allows the guitarist to add percussion to the music by tapping the soundboard; this is a common technique in bulerias.

The action
With regard to the strings, whilst both are nylon-stringed instruments, the distance between those of the classical guitar and the fingerboard is higher, allowing the strings to be plucked without resulting in distortion. The strings of a flamenco guitar, however, are closer to the fingerboard, which allows the guitarist to run up and down the neck more easily. To prevent them from buzzing, high-tension strings are used on a flamenco guitar. The bass strings are also more dynamic and produce the characteristic flamenco ‘growl’.

The neck
The back of the neck of the flamenco guitar is also flat to increase playability, whereas in the classical guitar there is some neck relief.

Their sound:
The classical guitar is a tool that is designed to play poly-timbral music and should have a soft attack, a sweet mellow sound and gradual decay. The flamenco guitar, as mentioned earlier, needs to hold its own when competing with the energetic dancers that form part of a flamenco show. It produces a loud sonic burst with a bright punchy sound, followed by a short decay. This is so that the quick notes that characterize flamenco music don’t step on one another.

As the flamenco model is smaller in size, it also produces a sharper, more nasal sound that is ideally suited to the fast-paced style of flamenco music.

The guitar Flamenca Negra differs from that of the guitar Flamenca Blanca by the woods used in the construction of the body. The back and sides of a Flamenco Negra guitar are made of denser woods, such as rosewood. The aim is to achieve greater sound projection and higher volume. These guitars are ideal for concert flamenco players, and anyone who wants to enjoy a versatile guitar with lower strings action. 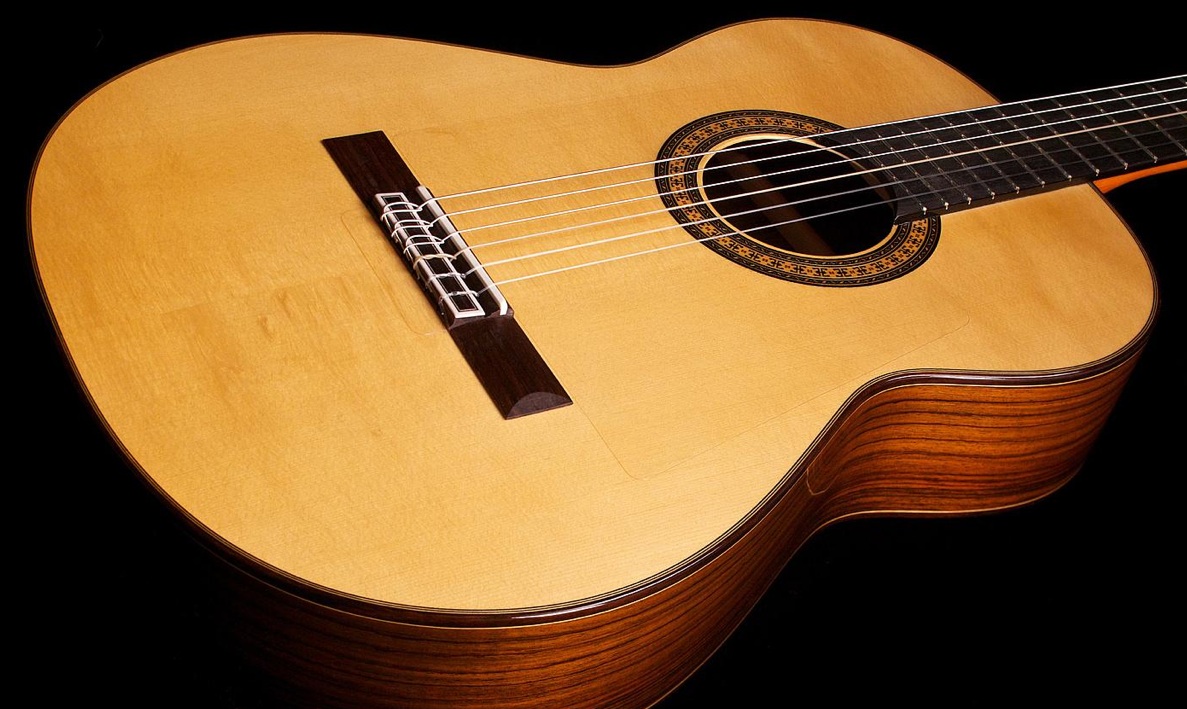